The Liberal Use of the Mob 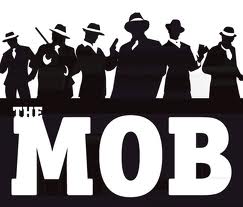 Ann Coulter has written a book called Demonic in which I am taking some liberties to quote and comment on.

Have you noticed that there are a growing number of mobs showing up at banks, hospitals, homes of CEO’s, private parties, polling places, malls and public beaches for the sole purpose of wreaking havoc?

This is the same mob that brought down Tunisia, Egypt, Libya, Yemen, the UAE and others. This is the same mob that several Democratic politicians, members of liberal news organizations who are championing the call to rise up here in America and riot like Egyptians. The communist and socialist such as Van Jones are joining the chorus basically saying the same thing. For those who don’t know who Van Jones is, he is a member of the Communist Party USA, who was appointed to a czar position in the White House, but stepped down when unmasked. END_OF_DOCUMENT_TOKEN_TO_BE_REPLACED

Links
Quotes
"I am sure there was never a people who had more reason to acknowledge a Divine Interposition in their affairs than those of the United States." - George Washington
Support CUPA
Recent Posts
Recent Comments
Archives
Categories
Meta